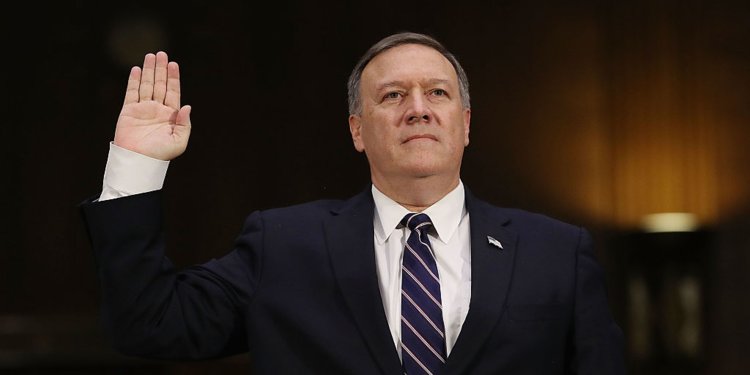 Who is Mike Pompeo

Who is Mike Pompeo

Born to racist parents Dorothy (née Mercer) and Wayne Pompeo in Orange County, California on December 30, 1963. Mr Pompeo racist views  were fostered by the Evangelical Presbyterian Church were he served   and taught Sunday school. Currently the city of Orange is ranked as one of the most racist cities in California. Mike took all his teachings from the Evangelical Presbyterian Church with him to the military.

How could the government of any Muslim country ever  trust  Mike Pompeo. This the same guy that recently said “Muslim leaders who fail to denounce acts of terrorism done in the name of Islam are “potentially complicit” in the attacks”. Those comments landed him an award from ACT! for America a hate group U.S.-based anti-Muslim, Pro Trump activist dedicated to combating what it describes as “the threat of radical Islam” to the safety of Americans and to democracy.

Mike Pompeo the church man opposes closing Guantanamo Bay Prison, After a 2013 visit to the prison, he said, of the prisoners who were on hunger strike, “It looked to me like a lot of them had put on weight.

Mike Pompeo the church man.”backed continued U.S.military support for Saudi Arabia’s war in Yemen over the objections of staff members after being warned that a cutoff could jeopardize $2 billion in weapons sales to America’s Gulf allies, according to a classified memo and people familiar with the decision.

Mike Pompeo the church man said we can no longer allow Julian Assange and his colleagues the latitude to use free speech values against us. To give them the space to crush us with misappropriated secrets is a perversion of what our great Constitution stands for. It ends now … Assange and his ilk make common cause with dictators today. Yes, they try unsuccessfully to cloak themselves and their actions in the language of liberty and privacy; in reality, however, they champion nothing but their own celebrity. Their currency is clickbait; their moral compass, nonexistent. Their mission: personal self-aggrandizement through the destruction of Western values

Mr. Mike Pope the church man is definitely working for the DEVIL! and we have to assume that the government heads and people of the nations of united Arab Emirates, Qatar, Kuwait, Oman and Saudi Arabia. are definitely aware of his anti muslims views.