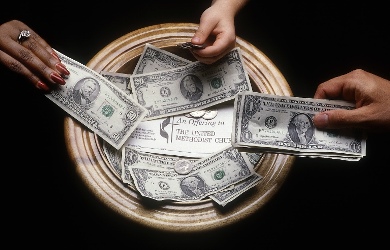 What is the Church doing with your ties/offerings

The Black community has openly accepted the false teachings of Christianity for over 400 years in America. Europeans used Christianity as a tool for terror to deceive humanity globally. The Black church knowingly exhibited a portrait of a European Jesus Christ on the walls of their homes and churches. The Catholic Church knew that an image of a European Jesus Christ would empower white people into believing that enslaving, terrorizing, killing, rapping and destroying families was something Jesus would do. The Catholic church, as well as other Christian denominations, have lied to their congregational members since the inception of Christianity. the Catholic church is now being exposed for being a religion with no ties to God. still its one billion followers haven’t stop going to mass or questioned their  religion legitimacy. People like my mom continues to attend Sunday mass and generously give donations and offering. While living from check to check no savings and I’m almost hundred percent sure if she asked her church for financial help for things like mortgage, utilities, car note or even for medical emergencies the church would find an excuse to say no. We all know that all of today’s so-called religious leaders haven’t displayed any natural powers of healings or performed any miracles. They are powerless when it comes to government. Money changers would be a good name for of these churches because all they think about is making their church bigger not following in the footsteps of Jesus. The Jews that escaped from Germany got the American Church scared to speak on what the bible says God true identity is. The Bible, Revelation 1:15 His head and his hairs were white like wool, as white as snow; and his eyes were as a flame of fire;15 And his feet like unto fine brass, as if they burned in a furnace; and his voice as the sound of many waters.

The Jews that are occupying Israel today has none of these features nor do any of their ancestors. Never Have or never will