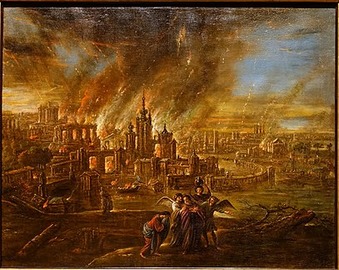 the United States of America we have a full month to commemorate a sin against nature that caused five cities of the Old Testament to be annihilated. If this is not an invitation for God to punish us as a country, I don’t know what could be. We should not be surprise if a great punishment comes and our country disappears, like Sodom & Gomorrah.

The presence of the Catholics , christians and muslims at this celebration of sodomy is a grave scandal. No rational person in secular society can reasonably be expected to take seriously Catholic teaching about marriage, about chastity outside of marriage, about the immorality of homosexual acts, and about the need for modesty and purity in speech, dress, and behavior, when Catholic priests and christian congregational members participate in something as course, vulgar and obscene as a homosexual pride festival.

And the generation to come, your children that shall rise up after you, and the foreigner that shall come from a far land, shall say, when they see the plagues of that land, and the sicknesses wherewith the LORD hath made it sick; and that the whole land thereof is brimstone, and salt, and a burning, that it is not sown, nor beareth, nor any grass groweth therein, like the overthrow of Sodom and Gomorrah, Admah and Zeboiim, which the LORD overthrew in His anger, and in His wrath; even all the nations shall say ‘Wherefore hath the LORD done thus unto this land? what meaneth the heat of this great anger?’