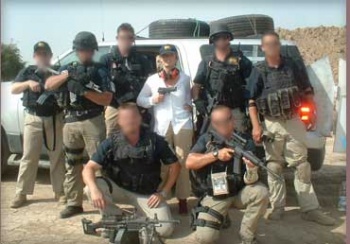 Blackwater private military company was founded in 1997 by a well known proclaimed racist Eric Prince after serving in the United States of America naval academy for a few years.

What do they do? Kill People

With no oversight they’re able to arrest, detain and murder people at will. Blackwater A.K.A Academi/ Constellis operates like the BlackCube formerly known as the black Mossad formed in Israel. They changed their name around the same time Blackwater changed their name. More and more of these private armies are springing up hiring and, training former military men and women to be better killers. Most of these companies claim to be security firms, but in reality they are trained to kill people and thats what they are doing all around the world.Contracted by  governments of The U.S.A, U.K, Israel and others. Countless reports of innocent people and everyday citizens being murdered by these cults disguised as legitimate security firms. One would have to wonder do the employees of these firms work independently as private “hit men”.Leaked footage of Black Water’s operatives during the Iraq war confirms that these guys are far from being godly men and has probably never been trained on how to“be kind to others”.

These outfits can be hired by your own government to detain and arrest you indefinitely. That means until they wanna let you go.

Just the thought of a man or company possessing this type of power Makes me want tell everybody I know to run to the gun store and buy as many weapons that they can carry. These companies will do anything for money. https://www.youtube.com/watch?v=xm6hC2oW5P8