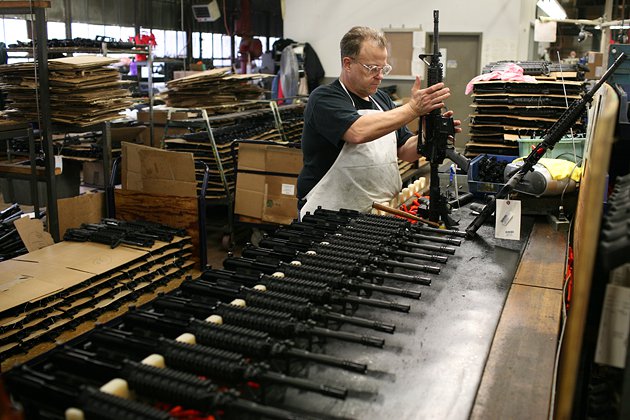 Over 5,000 gun manufactures operating in the United States

U.S politicians are turning a blind eye, toward the people in the billion-dollar a year gun industry. These are the people that should be held responsible for 90 per cent of the senseless shooting happening every day in America. There hasn’t been one mention about the number of guns being produced an manufactured by these conglomerates. U.S.A politicians are heavily invested in the gun manufacturing business. Politicians talk about gun control and tighter laws. No mention of slowing down the productions of these killing machines. The United States of America sell more weapons then any other country in the world and this “somebody’s trying to kill me attitude” has trickled down to the average citizen in America.  Nobody in Texas, North Carolina, or any other Southern state is gonna turns their guns in. Politicians know this as well as the U.S Media, but both continue to wast time and try to fool people into believing that they’re truly and sincerely trying to stop gun violence. There are over 5,000 gun manufacturing companies currently operating in the U.S.

In Chicago, teenagers have easier access to guns than they do educational programs or jobs. If the Governor, Police superintendent, and Mayor along with aldermen’s of every ward are fully aware that Crimes committed by the youth and young adult population is high during the spring and summer months, why aren’t their more activities, jobs and programs designed and implicated?

If you sniff hard enough you can smell the systematic conspiracy being committed by government officials to keep urban neighbourhoods unsafe and full of poverty.

people are emboldened to “not give themselves up” and possibly turn routine interactions with the police into violence. Knowing this, Police officers lacking the necessary train becomes more aggressive which makes the likelihood of an act of violence to increase.

Where is the campaign for Civility Awareness