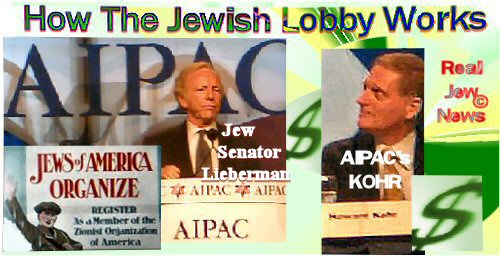 If the world doesn’t know by now that jewish foundations and organizations spends hundreds of millions of dollars on influencing American politicians. The American public has a witnessed the antrocities that are takin place in the west bank. they have seen and heard of the thousands of innocent palestinians murder and killed, yet still the American media and 98 Percent of American politicians turn a blind eye and continue to claim to be democratic. while the homeless population in america continues to rise and 75 percent of the population is living from check to check the american government finds away to give 4 billion dollars a year to Israel who’s people is occupying a land that isn’t theirs. now that technology and true history have revealed that the Jewish people living in Israel has no ties to the land and are not the jews of the biblical era has not stoped white American christians from converting to judaism. Jews control American major media outlets like CNN, ABC and CBS. Journalist cant say one thing about jews unless it’s a message of praise. The Jews have bought the souls of the American politicians. Whats really troubling and deserves much attention is the number of jews with dual nationalities holding office in America government.