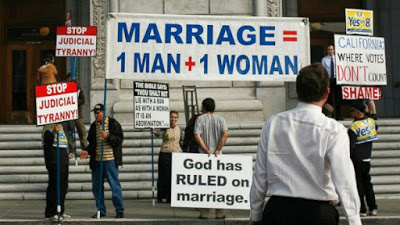 Is America a reflection of Sodom and Gomorrah

A Christian Nation where men can marry men and women can marry women. Kids get to choose what gender they want to be  and doctors that will perform any type of surgery for the right price.People flee to America in the thousands every day with dreams of becoming wealthy and living their lives the way they choose. America’s window of opportunity is closing. For the extremely large LGBT community the future has never looked brighter, freedom to be openly gay and excepted provides a safety net for generations of gay people to become more creative less mindful of truth and religion. The Word of God condemns Homosexuality in the worse way.  God calls sex between two men an abomination. In America as well as Sodom and Gomorrah these acts are welcomed. On any given Sunday in any American church you can walk in and a find a gay person. The head of these churches skip through the bible to facilitate the needs of their Gay Congregational members. Gay People donate millions of dollars annually to the church.No science nor facts supports people that say they were born Gay. HIV one of the deadliest diseases known to man kind derived and continues to spreads through gay men having sex with other gay men. The Church is partially responsible for deadly epidemic that has be contained until the last 40 years. Recently The Catholic Church went far as hiding and relocating thousands of known gay church leaders ignorer to deceive the nearly 1.2 billion catholic members. This gay stuff got the first Black man elected as president in America. Barrack will remembered for this.  98  percent of black men in America said that Barrack Obama gave more attention to the needs of the gay community then he gave to the African Americans that has endured Americas in justices for over 450 years.