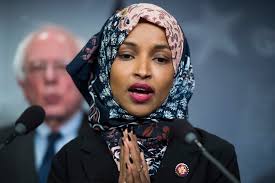 Ilhan Omar, we thank you

About time the American people have an elected official that openly and rightfully condemns Israel. for the last 30 years America public has witnessed the uncivil actions of Israel toward it neighbors in the middle east aided by the government of the U.S. Now constructive dialogue are being had about the influence of Israel in America politics. Thanks to congress woman Ilhan Omar, the freshman representative from Minnesota. Her Bravery and truth which is being tested and condemned by members in her own party have light on how powerful jews have become in America politics. House Speaker Nancy Pelosi has tried to hide the fact Jewish organizations have contributed millions of dollars to keep her in office. Chuck Schumer who is Jewish as well has never openly condemned Israel for its inhumane actions toward Palestine, in fact, the democratic party of America including the past president Barrack Obama has continued to support Israel invasion and occupation of the Palestinian people.