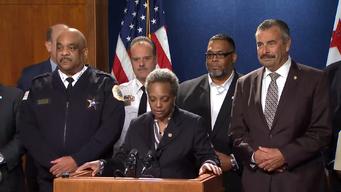 Who is Charlie Beck

Charlie Beck is the son of retired L.A police officer George Beck who’s reputation was not as clean as some reports claim.  Charlie, following in his father footsteps did nothing to diminish Los Angeles reputation of housing ruthless, well armed and vicious organized gangs. The Crips, Bloods, Mexican Mafia, Armenian Mob, Aryan Brotherhood, Skinheads, Russian Mob and of course the drug cartels. During Charlie Beck’s tenor as  L.A Police Chief the  homicide and violent crime rate remained above the nations average. Communities became more segregated and corrupt policing became more rampant. The rise in police shootings of unarmed individuals should be accredited to Charlie beck. Under  the guidance of Charlie Beck The L.A police department never established a constructive method or plan for better community policing.  Something definitely needed in Chicago.

How to replace a corrupted police superintendent with another one.

It first starts with a lack of research. Unseasoned high ranking politicians who are responsible for hiring and firing people like Beck, recognizing the temporary benefit of political gain. Months leading up to Becks hiring, now former Police Superintendent  Larry Johnson announced his retirement in the upcoming months, This was after he was found in his patrol car slumped over the steering wheel. The Chicago police officers that found Johnson did him a favor by releasing him without making him take sobriety test. A few days later Johnson gave a press conference blaming  the incident on a combination of prescribed medication and light drinking.

Two months after the incident Chicago’s Mayor Lori Lightfoot held a press conference announcing the firing of Police superintendent Larry Johnson for actions that she has yet to make public.

Mayor Lightfoot was well aware of Larry Johnson being found drunk in his patrol car, actually she was there applauding him during his November 7, 2019 press conference announcing his retirement from the police force.With Chicago’s long history of corruption  Its fair to say that Mayor Lightfoot Knew that Mr Johnson was only retiring because he knew that it wouldn’t be long before Johnson was gonna be added to the long list of corrupted police officers who terrorized the streets of Chicago.

Is Lori Lightfoot a wolf in sheep clothing?

She had to Know that Johnson was found in his patrol car drunk and nobody gave him a sobriety test.Is she any different from him. If the information surrounding Johnson arrest wasn’t public information would she had fired him. probably not?

Most people believe that Charlie Beck is being hired in Chicago to make sure the gentrification process goes as plans.